A vast majority of the bands that played in Oelwein at the Coliseum, taverns and bars were country bands. Oelwein boasted many different styles of music: Rock, Country, Big Band, Folk, etc.  Among all those different music styles, probably the most successful band to ever hail from Oelwein was a variety band called “The Andy Doll Band.”

In 1973, there was a Country Music Show and Contest at the Oelwein Drive-In that featured many local bands. Click on the picture below to see article that ran in the local paper.

Some of the country bands from this era of Oelwein music include: 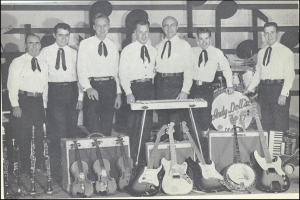 Members: Chet “Daddy-o” Bradley, Billy Reints, Gary Hinderberger, Andy Doll, Clarence “PeeWee” Cherrier, Lefty Schragge, Dean Niehaus, Carlos Freymiller, Harvey Frederick, Larry Smith,  Bobby Hankins, Ike Thurn and others.  Added on for the bigger dates were steel guitar player Dale Thomas and Sue Ellen, vocalist.
The Andy Doll Band started in May, 1952, and grew to top success through the years.  Two years after their Fan Club was formed, their hit record “Wild Desire” came out and climbed to the top of many charts.  In the last year the NBOA (National Ballroom Operators Association) held their annual poll, the boys received this national rating on an award Andy kept in his office for years; as follows….Best Western Dance Band in U.S. was No. 1 – Hank Thompson; No. 2 Andy Doll Band.  In The Best Small Variety Band In U.S.; No. 1 – Dukes Of Dixieland; No. 2 – Clyde McCoy; No. 3 – Andy Doll Band.
Check out his page and listen to some of his music that all local country bands in Oelwein and the midwest tried to emulate for years.

Bobby Hankins and the Blue Boys

MEMBERS: Bobby Hankins, Bobby Hicks, Billy Wayne, Hal Rugg, Dixie Hankins, Al Ricchio, Lefty Schrage, Barb Schrage, Keith Thompson, and Buddy Cornwall
Bobby Hankins was originally from Edgewood, but spent a lot of time in Oelwein working at KOEL and performing around town. Did you know at one time Bobby Hankins and Andy Doll were both on the front page of the Fender catalog as endorsers right along with other big names?
Bobby’s daughter, Dixie Hankins, who played drums with her dad’s band when she was about 8 years old, is still continuing her career in Texas. 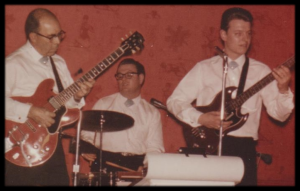 The Blue Flames were inducted into the Iowa Rock and Roll Hall of Fame in 2016.

The original members of the The Blue Flames (Pee Wee Cherrier, Bill Reints and Gary Hinderberger) came from the Andy Doll Band,  The band played throughout the northeast Iowa area. Songs ranged from 50’s and 60’s rock, old and new country, with a half dozen or so off the charts at all times.Their songlist included Pretty Woman, Cab Driver, Old Time Rock and Roll, Blue Skirt Waltz, Rock Around the Clock, and Smoking in the Boys Room. Over the years the band worked up over 1000 songs. They always featured three way vocal harmonies from day one until the end.
The Blue Flames played until about 93 or 94 with Bill Reints, Steve Westpfahl and Don Stohr.

Leo Greco played with the Tom Owens Band until 1948 when he left started his own band, Leo and the Pioneers, which eventually became the Leo Greco Band. The band toured the Midwest for more than 20 years. “Kent Seeds presents the Leo Greco Show” was aired on six television stations in Iowa and Illinois and 23 radio stations.
Host of KOEL AM Polka Party and had a hit song “Little Red Wagon” He also was on the air at KGLO Mason City, and WMT Cedar Rapids.  Greco was honored by the National Association of Broadcasters with the Marconi award for Radio Personality of the Year.

Formerly a member of the  Bobby Hankins Show, Ricchio established himself as a premier steel guitar player, toured as a solo act and fronted his own band for many years. Members of his band included –  Mike Ricchio, Glen Ostrander, Jerry Howard, Sharon Morris and many others.
Al and his band appeared at many state and county fairs opening for acts like Dolly Parton, Johnny Cash, Brenda Lee, and Billy Crash Craddock. In addition to performing with national acts, Ricchio wrote many songs that he sold to country music stars who recorded them for their albums.
Ricchio also had a long time friendship with national recording star Marvin Rainwater.
Check out his page to hear some of his live recordings. 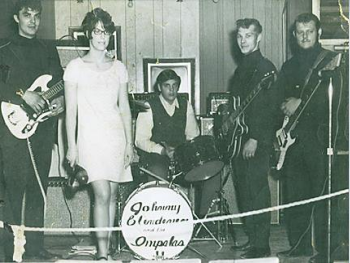 MEMBERS: Johnny Clendenen, Sherry Clendenen, Jim Mazziotti, Rick Clendenen, Jim Ponder, and Tom Kammer.
Johnny’s band was the “House Band” at Berger’s Tap in Downtown Oelwein for many years.
Johnny’s band played all over Iowa in addition to Wisconsin and Minnesota.
The band recorded two songs, “Bull Dog”, and “Blues Stay Away From Me”
Johnny Clendenen was “Rockabilly” before the term was invented and he enjoyed how many of his fans thought he looked and acted like Elvis. 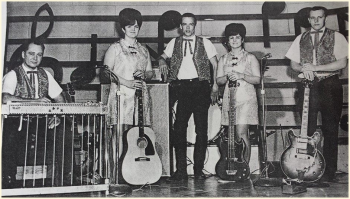 MEMBERS: Milt Campbell, Jim Campbell, Judy Campbell, Danny Campbell, Janet Campbell, Ronnie Fitz, Jodeen Fitz, Tom Kammer
In 1966, Milton formed the Country Buddies Band that most of his children played in along with a son-in-law.
Milt also played in several bands throughout Iowa and Missouri, playing country music at community events and jamborees. He also had a recording studio while living in Oelwein.
Milt Campbell was one of the top country bands in Eastern Iowa at the time. They also made money recording and playing on jingles for local merchants that were broadcast on local AM radio station KOEL. Milt was a member of the Oelwein music base that included Bobby Hankins, Leo Greco (hit song “Little Red Wagon”), Pee Wee Cherrier, Andy Doll, Alex Ricchio, and others. A lot of those guys would stop at Milt’s studio frequently. Milt played steel guitar, banjo, fiddle, and mandolin. Milt was a “cool” guy that came from a completely different generation and musical background and yet was friends with many of the young musicians in Oelwein.

Bill Reints was a member of the legendary Oelwein band, The Andy Doll Band and later started The Blue Flames.

He was the leader of the Blue Flames for over 25 years.

The Blue Flames (Bill Reints, Donnie Stohr, and Steve Westpfahl) were inducted into the Iowa Rock and Roll Hall of Fame in 2016. Read Bill’s story at his website. 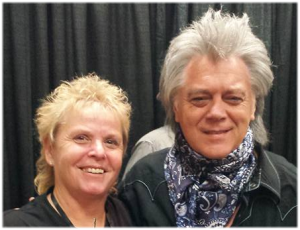 Dixie played with her dad in the original Bobby Hankins Show. She is still making a living playing drums in Texas. 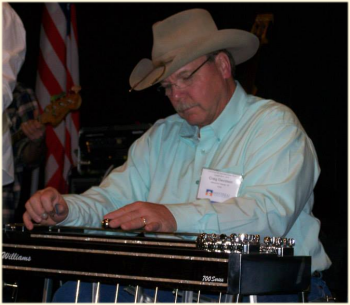 Craig Davidson started out playing music in Oelwein with Donnie Stohr and Steve Westpfahl. He also filled in with Milt Campbell and Country Buddies, The Blue Flames, Don Vargason and Butch Gage.
He went from there to playing with The Esteems from Waverly. He did this gig for about a year before going to work with CD Country Sounds out of Manchester.
Just before he turned 16, Davidson joined The Drifters from Janesville. He played for them about 8 years.
From there he worked with several different bands until he started Quickdraw in the early 90’s. They were together about 6 years with various local members until Davidson got tired of band leading and went to work for The Dave Dighton Band from Coggon.
With Quickdraw he worked with David Houston and Hank Thompson. They also opened for Waylon Jennings, Sammy Kershaw, Clinton Gregory, and Highway 101. 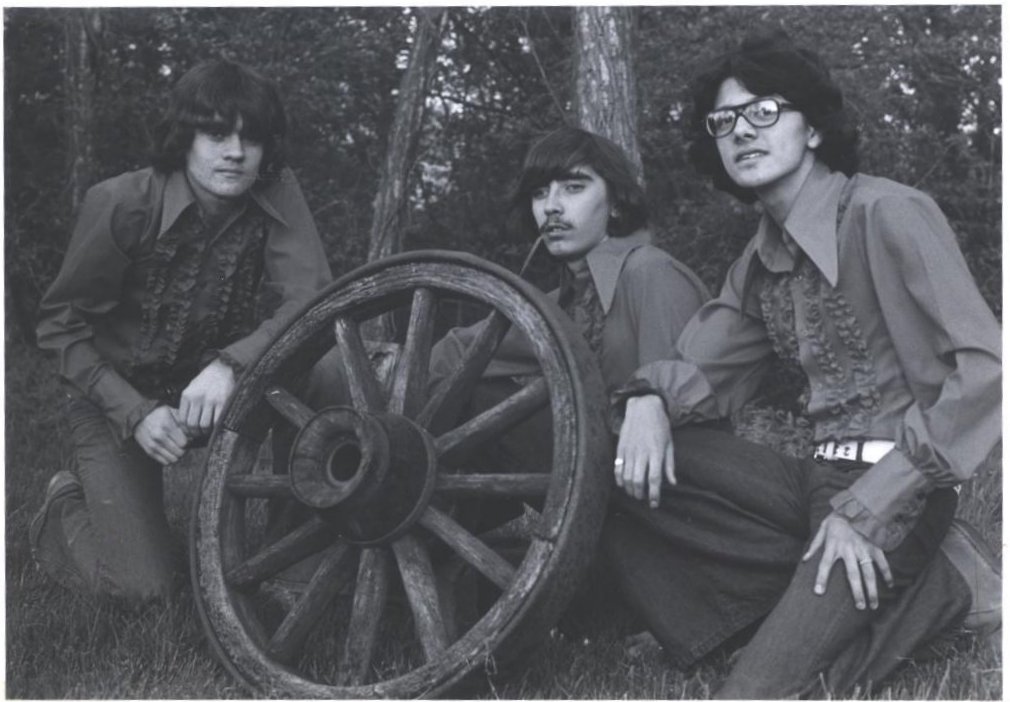 MEMBERS:  Mike Vargason, Rob Tatro, John Chapman, Kelly Murphy. Later evolved into Blue Horizon.
These were 14-15 year old kids who were playing all the local bars and taverns around northeast Iowa.
For their first couple of gigs, they would run all the instruments and vocals through one little amplifier and played country songs by Waylon Jennings, Chuck Berry, Jerry Lee Lewis, Roy Clark, and Mel Tillus.
A couple of rock songs they learned at this time was  Roll Over Beethoven by Electric Light Orchestra. Also, Joy to the World by Three Dog Night.
They played at Tavern in the Town (The TIT) in Wadena and at Clyde Ohl’s in Maynard. Also played in taverns and bars in Arlington, Fairbank, and Aurora and other northeast Iowa villages and hamlets.
They later decided to change from country to rock music so that they would appeal to their own age group. They changed their name to Blue Horizon are started a new career that far surpassed their meager beginnings. 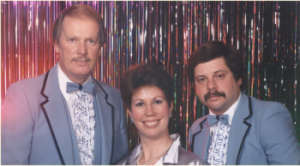 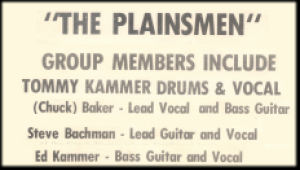 Leave a comment below to let us know more details about the above bands and any additional bands we should add. If you have pictures, websites or music to add, let us know.