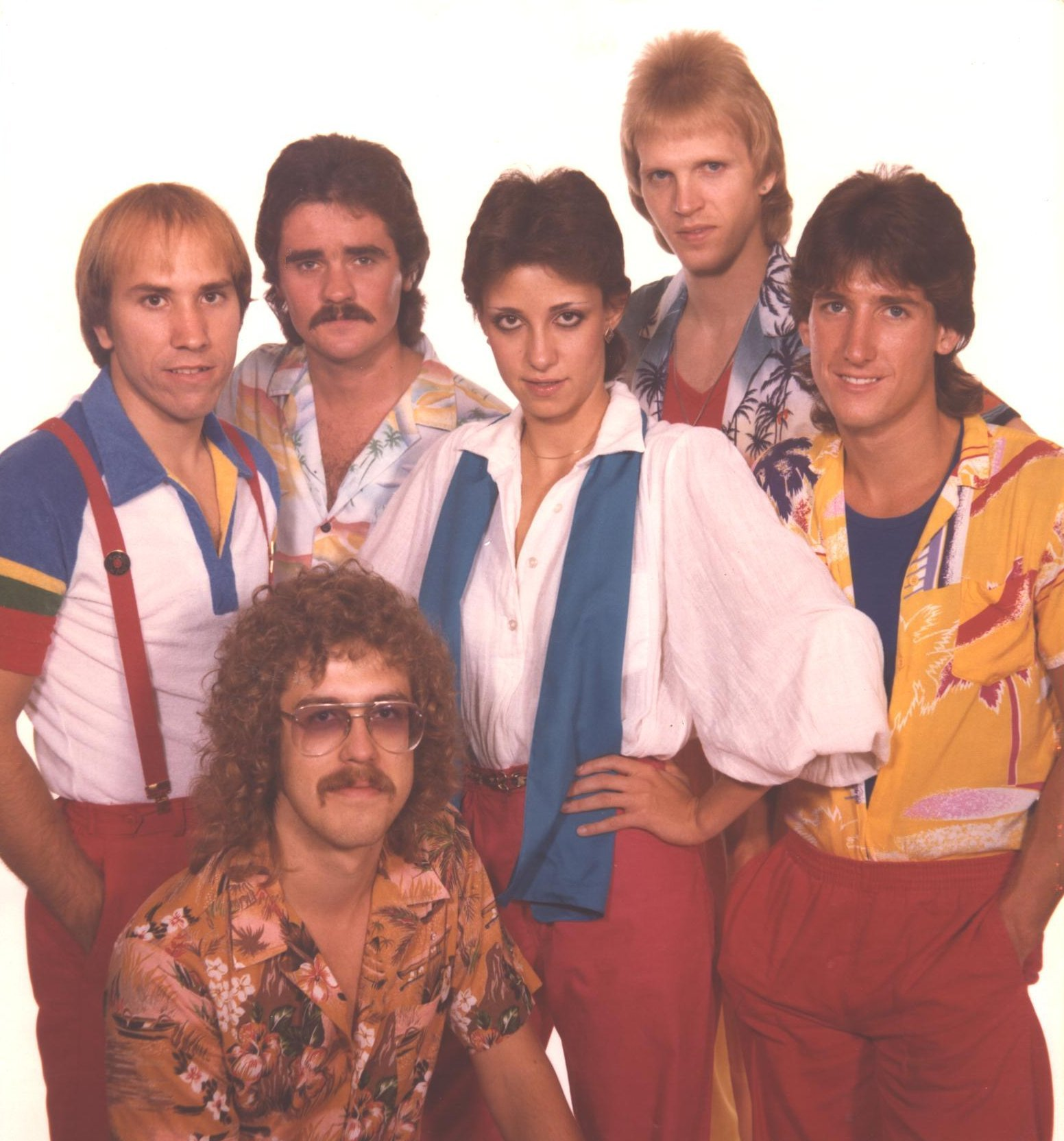 The beginning of the band:

Mike Cutsforth and Bruce Baugher were born in Waterloo, Iowa and went to high school together. They had played together in several local bands with one of them being Clear Skies.

At some time around 1979, they decided to start another band.

Cutsforth had seen a road band that came into Waterloo that had a hot bass player. One of the amazing things about this bass player was that he could “pop” and “slap” his bass parts in a way that made Graham from of Sly and the Family Stone a bass guitar stylist. This band was “Spectrum” out of St. Joe, Michigan. Cutsforth knew that this was a bass player he wanted in his band. He contacted the bass player and persuaded him that playing in a band in Waterloo Iowa would be worth his time. The name of the bass player was Steve Nichols and he was soon in Waterloo waiting for Cutsforth to finish building his band.

Cutsforth later contacted Nancy Ganske from New Hampton to be a co-lead singer with him.

Hip Pocket’s first practice (audition for band members) was at Mike Marlow’s house in Waterloo. They continued to practice there for several years.

Cutsforth had a solid reputation of playing in professional rock bands and also had connections on how to book gigs at the top clubs and lounges in the area. Murphy was now playing in the big city and Cutsforth was making it happen.

The live music scene in Waterloo in the late 70’s and early 80’s was red hot. There were numerous clubs that booked bands for weekly engagements. There were many road bands that played the local Waterloo/Cedar Falls circuit. Additionally, there were several top-notch local bands who made a good living playing the local clubs. 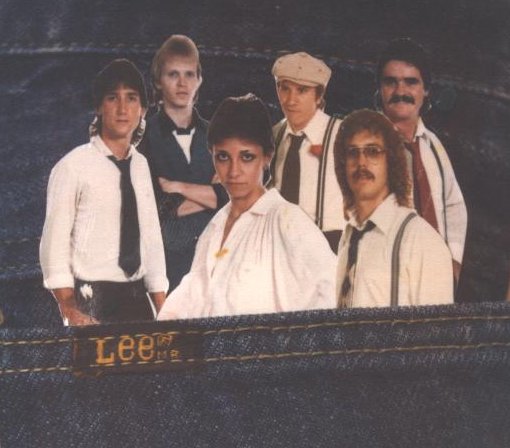 Cutsforth knew EVERYONE in the Waterloo/Cedar Falls local music scene. He introduced Murphy to local icons such as Mike Anderson (Footloose Band) who gave him tips on guitar playing and how to be successful in a cover band. He also introduced Murphy to legendary Waterloo club bands such as Easy Street, Surprise and Milk & Honey who in addition to playing throughout the region were regulars in the Waterloo club circuit.

One of the driving forces of the band was to convey a style. You can see by their promo shot that featured 1980’s bright colored clothes that portrayed a “new wave” look that heavily influenced the band.

The song list was drastically different than Murphy’s previous bands. Hip Pocket’s songs, hand-picked by Cutsforth, were more of the type of professional road bands that toured a circuit of clubs as opposed to rough rock and roll songs played at ballrooms and high school proms.

Hip Pocket’s first gig was at the Howard Johnson’s (HoJo’s) in Cedar Falls.

Bruce Baugher’s dad was hired as the manager of the band. He was instrumental in working out the details of keeping the band working. 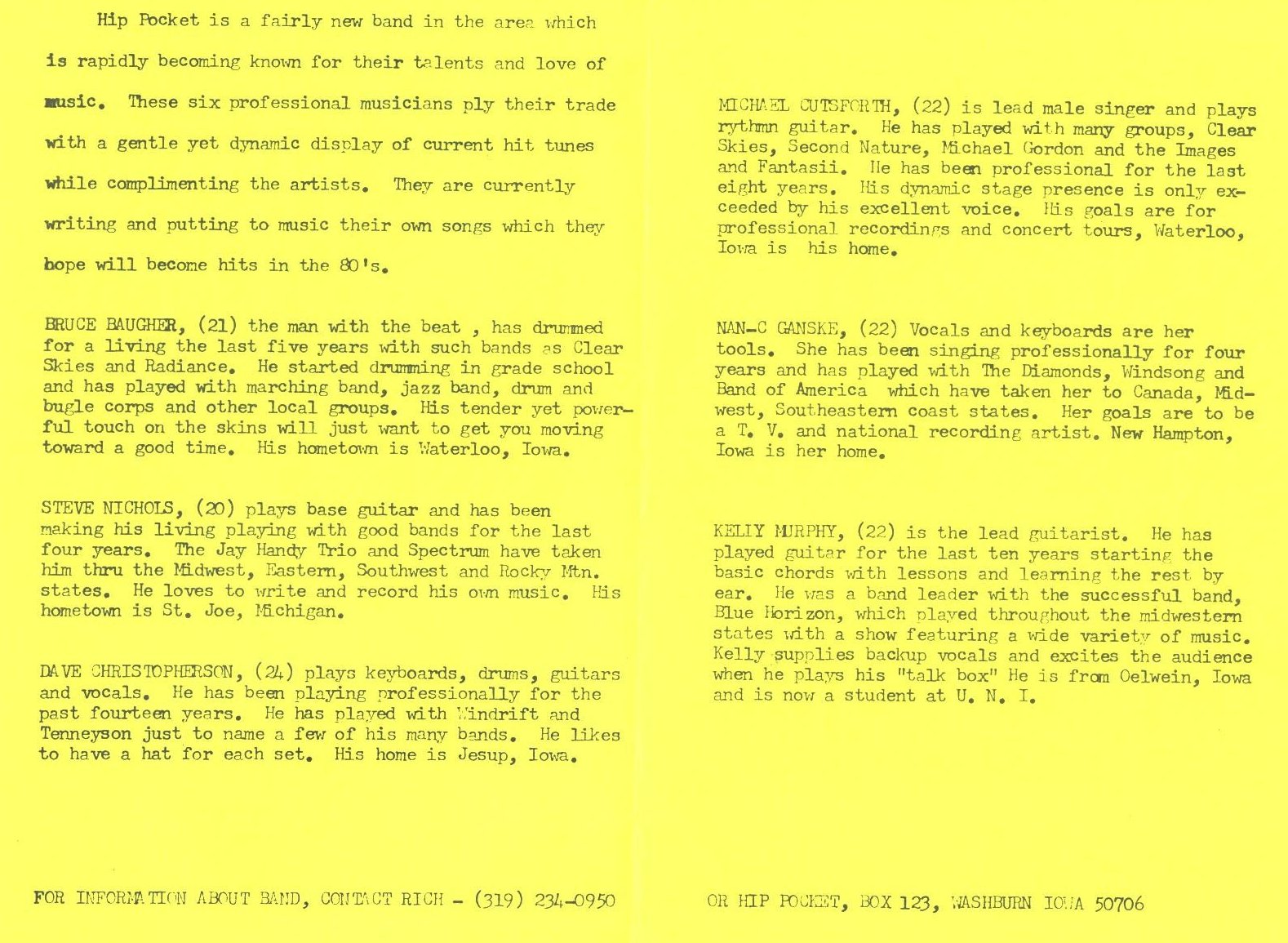 It was during this time that Murphy experienced playing club dates that consisted of 5-6 nights in a row.  He had much experience playing one nighters, two nighters and sometime 3 nighters. But Hip Pocket frequently played a month at a time with only 3-4 nights off.  This was the type of schedule that road bands played and it resulted in stage presence that stood apart from the typical weekend warrior bands. They played at Ramada Inn, Twin Torch, Raintree Lounge, Porky’s Red Carpet, and many Waterloo/Cedar Falls High Schools.

With Murphy going to UNI and Nichols being from St. Joe Michigan, they shared an apartment as roommates while playing in the band. 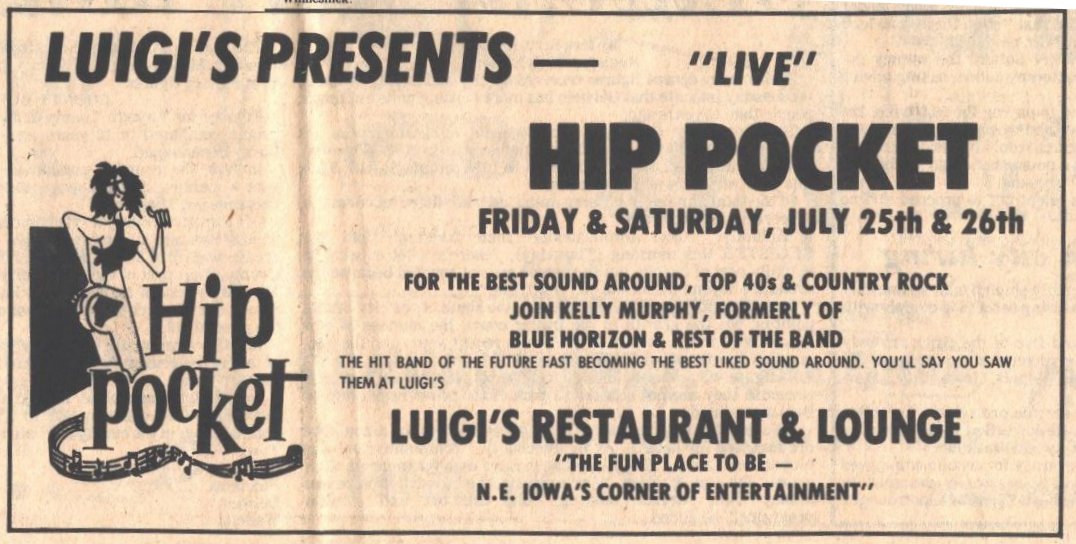 Here is a newspaper clipping from a gig when they went back to Murphy’s home town.

An interesting thing about this band is that they became an official corporation. They filed for a corporation name, paid quarterly corporate taxes and gained legal protection by their corporation status. Their official name was now Hip Pocket, Inc.

One of the reasons for incorporation was that friends of theirs were in a band that was involved in a serious auto accident involving their band vehicle that resulted in a fatality. They were later sued and were judged to be liable for a large amount of money that basically bankrupt the members of the band. With Hip Pocket being a corporation, any settlement against them could not affect the individual band members, only the corporation.

The end of the band:

The band eventually ran it’s course and Murphy concentrated on his college career.

Cutsforth and Baugher later formed a band with  Murphy’s former band mates, Terry Wheeler and Rob Tatro. This band became a huge Waterloo band that played for many years and eventually recorded an album. The name of this band was “Proof”. 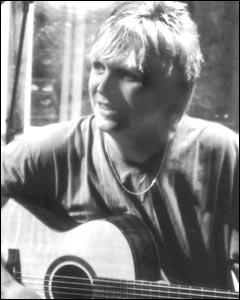 Michael Cutsforth is now the owner of MC Audio in Waterloo that has produced and recorded music from many area bands. He performs regularly in the band, “The Wicked Andersons” Here are a couple of articles regarding his recording studio on Waterloo.Article one, article two
Cuttsforth was selected to be a member of the Iowa Rock and Roll Hall of Fame for 2014 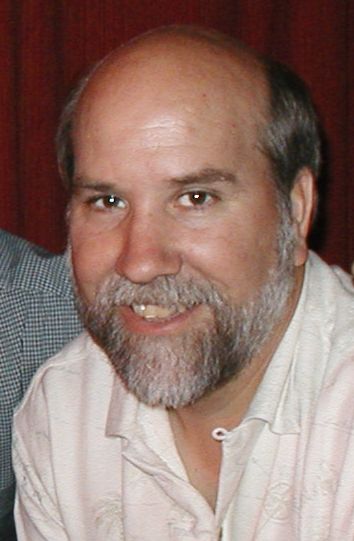 Dave Christofferson played in several local bands and also played for a USO band that toured throughout the world. He eventually played in a local band (FACE) that included Skip Franklin from the Tennyson band. He was inducted into the Iowa Rock and Roll Hall of Fame in 2015

Nancy Ganske – In her own words:

After leaving Hip Pocket, I played with another Waterloo band briefly, then hooked up with Cutsforth again and played with Mynx.  Original + cover band…. played keys and sang.  After that band ended I moved to Minneapolis to return to school and got my degree in broadcasting.
Played 6 nights a week in Minneapolis while going to college with a band called “Gorgeous” put together by the legendary Lonnie Knight.  He was up for MN music guitar player of the year against Prince during the time the band was together.  He lost to Prince but I got to meet and get to know Prince because of the nomination.   We performed with Michael Johnson (Bruce Baugher sang a song or two of his) and spent a good deal of time in the studio with original material.  A great time in my life!
After graduating, the band parted ways, I met my future husband, had two boys, built a geodesic dome home on the MN river bluffs with my husband and lived a good life.  Once the boys were a bit older, I joined a band in Minneapolis called “Flasher” – current music with originals and played for about 5 years.  MC’d some events, worked in studio for various artists and got involved in commercial voice overs.  Over the years, the kids grew up, my husband and I split up and life went on.  I occasionally sit in with bands around the cities and have had some great reunion performances with former band mates.  Currently I am not performing.  Living a most excellent life in Minnetonka MN as a single independent aging kid! 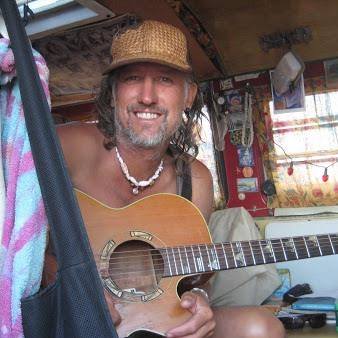 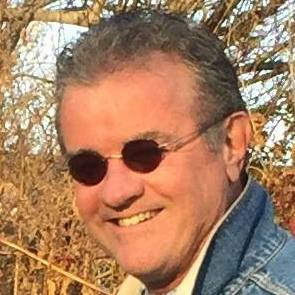 Kelly Murphy joined the Waterloo/Cedar Falls Supergroup Tennyson after Hip Pocket.  He then relocated to Bloomington Indiana to attend graduate school at Indiana University. He continues to play live music in Indiana.

Murphy is now working as an Instructional Technologist in Indiana emphasizing the integration of technology into K-12 and Higher Education curriculum to increase student achievement. In addition to his academic and musical interests, his expertise in website development led him to create the HubCityMusic website. 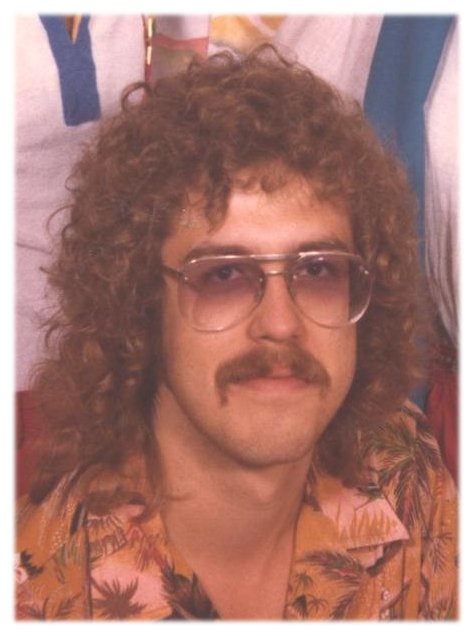 Nichols went back to St. Joe and it is not clear on what he did after Hip Pocket.