The original lineup of Reaper:

This version of Reaper played at the Sacred Heart Gymnasium in the mid to late 1970’s.  According to Dan, at $1 each for admittance, the guys made $500.

Other members who were later a part of the band:

Also, Steve Miller Band, Jefferson Starship, Styx, Led Zeppelin, and many other songs from the then popular groups.

Take two of their promo shot

Memories from the band (in their own words) : 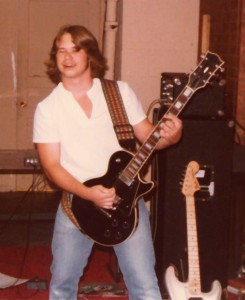 Tony Nash says, “My final performance of the band was the last day of the school year before Christmas break 1981, on the stage in the gym at OCHS, for a couple hours, non-stop. We started earlier than we said we would, played later than we said we would, but didn’t get in trouble. We turned everything up to max volume, aimed all speakers at the center of the gym, and wailed on it! I was told that the gym floor was vibrating as was the glass wall on the front of the school, about 40 feet from the gym wall. We used all the stage lights, using one of the experienced drama stage hands to operate them. When we finished, I think we were all deaf and had headaches. …Yeah. It was fun. Every practice, every performance. Even with ringing ears and headaches.”

Tony Nash, “We practiced hard, especially to learn a new song. We had a great time, and laughed a lot at each other. It is hard to find friends like that anymore.”

Below is Reaper during the 1979 Spring Follies.  Tony Nash is wearing the cowboy hat looking at the camera. Dan is talking with John with Adam behind him… all you can see is the bass, and Jeff is wearing the shades headed for his keyboard. 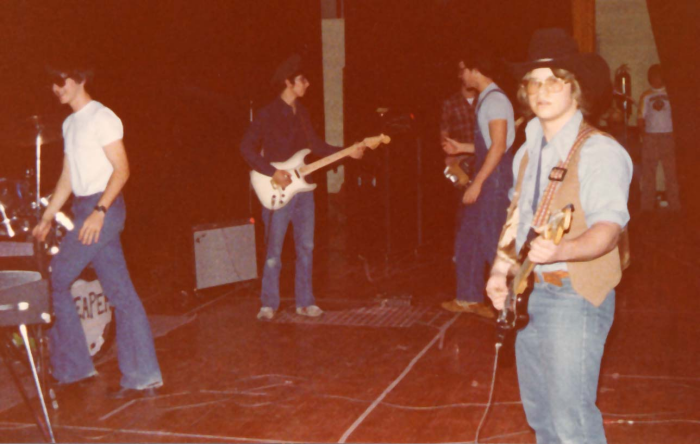 Video of Reaper Reunion at KAMMERSTOCK 2015

Original members of Reaper (Mike Hernandez, John Gerstenberger and Dan Falck) were joined by Seth Vargason and Russ Fagle at the Oelwein Knights of Columbus on December 12, 2015.