Subtitle: Bass Player “ever since his cello broke” from Oelwein by way of Ottumwa Iowa

Blaine’s music career began in Ottumwa Iowa, where it was suggested he might try cello due to being a sort of lanky kid, even at age 6. And Ottumwa had a very fine orchestra program. There was a married couple who ran kids through the program like Japanese sushi dishes, using the Suzuki method. When Blaine arrived in Oelwein the 2nd time (long story), he was an accomplished cellist with nowhere to play. He had performed regularly with the Ottumwa Community College Orchestra as an 11 and 12 year old.

Tragically, while playing cello at Oelwein’s Grace United Methodist church, the cello’s head piece snapped clean off. That’s still a mystery, but Blaine’s bass career began shortly thereafter when the junior high needed a bass player. The first tune he learned was Walk Wild which featured a lot of the open D string. Seemed easy enough, until he tried playing a scale. Come to find out, basses are tunes in 4ths, not 5ths! So it was time to unlearn the cello, not to mention the fact that Oelwein rocked it with no orchestra in sight.

In high school Blaine was befriended by his vocal teacher, Dan “the man” Malloy who was forming a 50s band doing everything from At The Hop and Rock Around The Clock to some of the current hits of the 70s. At age 14 he was more than happy to learn those bass parts, and it turned out to be the greatest classic rock and roll training he could ever have, playing Elvis, Chuck Berry, Bill Haley, Doobie Brothers, James Taylor, Chicago, and America. The band featured 5 vocalists from Dan’s choir, who were all juniors in high school, and The New Danny and the Juniors was born. They quickly became popular and travelled to various cities performing, and to Minneapolis once too, where the 14-year-old dared to taste some liquor to be “one of the guys.” 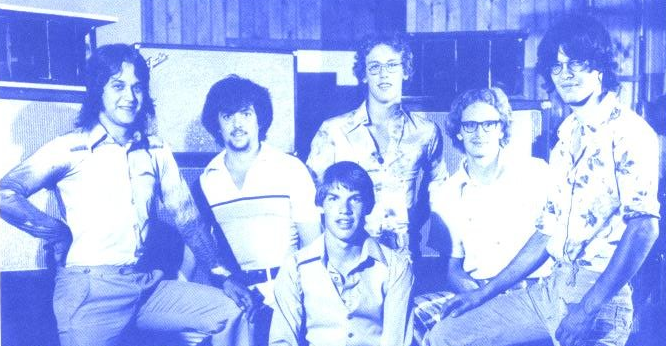 Friendships were formed, and drummer Tim Jack (and his brother Les) were Blaine’s next door neighbors, and the perfect guys to help form a garage band named JW Swift, a name Blaine cooked up and lives to regret. The first band he was in at age 5 had a much better name! The Previous Hours. Wow. 4 years old and the band played drums with tinker toys and TV trays, I kid you not. But JW Swift was a band that enjoyed gigging on current rock tunes from REO to Bad Company, Chicago, and Lynyrd Skynrd. We had the keyboard action going on too thanks to Les.

Blaine also played in the high school jazz band and teacher George Foy took a liking to Blaine, and decided hey, he and drummer Dan Gordish are always jamming like crazy, so in the jazz band, when it came solo time, he often allowed the two of them to take it away on their beautiful improvisational balloon! That resulted in Blaine and Dan winning many outstanding soloist awards at the various jazz competitions they played, and upon graduation, George had to do something special, and created a new award, called the Louis Armstrong Jazz Award. Blaine was its 1st recipient.

Blaine followed another Oelwein High alumnus named David Jaggard to North Texas State (a pianist and composer now living in Paris) where he studied Jazz Improv for a few years before taking his first full time professional gig at the La Quinta on the beach in Corpus Christi, and then toured with various bands; mainly with David Alan (facebook.com/david.ulinski, aka The Big Bam Boom https://myspace.com/thebigbamboom) and Joe Milton (http://www.carolmarksmusic.com/joe_milton.htm) who hired him to tour with a band called Opera Coupe.

That ended after over 4 years of traveling to dozens of cities and many states, and even gigs for ARAMCO in Riyadh, and a trip to Montreal. Chapter 1 was finished; Blaine was done he thought. He gave his life to Jesus Christ while in Houston visiting his Mom, went back to finish college at UNI Cedar Falls, and stopped playing bass (although he did sit in sometimes in the UNI jazz band). It was a way to sever the ties to rock n’ roll and the hard lifestyle. After all, the 19-year-old keyboardist and bandleader in his last band was very talented, but very much an alcoholic, and the sound man was a drug addict. It was a different town every week, and feeling like a ship with no rudder, Blaine resigned his position in that band.

Who knew that there was so much more to come? Took awhile, but in short, while teaching ESL in Korea he was soooo homesick, and had to play music, so he got some Real Books and started to play jazz gigs in Seoul, and after returning to Houston, eventually began to play music in churches such as Second Baptist, Gloria Dei Lutheran, and eventually Tallowood Baptist as a contemporary bassist. While at Tallowood (9 years and counting) he has been privileged to play with such musicians as Matthew and Lizi Bailey http://www.lizibailey.com/ Dave and Jess Ray http://daveandjessray.com/, David Needham, Jesse Fox, Joel Winters and literally hundreds of other fine musicians he never dreamed of playing with.

He also became a writer, submitting a story to About.com about his favorite bassist Jaco, and became their “Jazz Guide” for four years where he learned a lot about web content, and writing, and email newsletters. He also spent some time as a writer/editor for allaboutjazz.com. He’s the co-founder of A Train Creative, atraincreative.com where he, along with his talented designer and wife Youngsuk whom he met while teaching ESL in Pusan, create websites, business branding, and provide SEO and Video services as well.

See what Blaine is doing now by checking out The Edge Blog at A Train Creative.

He cites a tune by Phil Keaggy as his life tune, his turnaround tune, called Full Circle.

“Full circle, I have come, You can ask me where I come from And when I tell you that it’s no lie I’ve come full circle in my life.”