Dick Wagner 1976:  Live on stage with the Alice Cooper Welcome To My Nightmare Tour 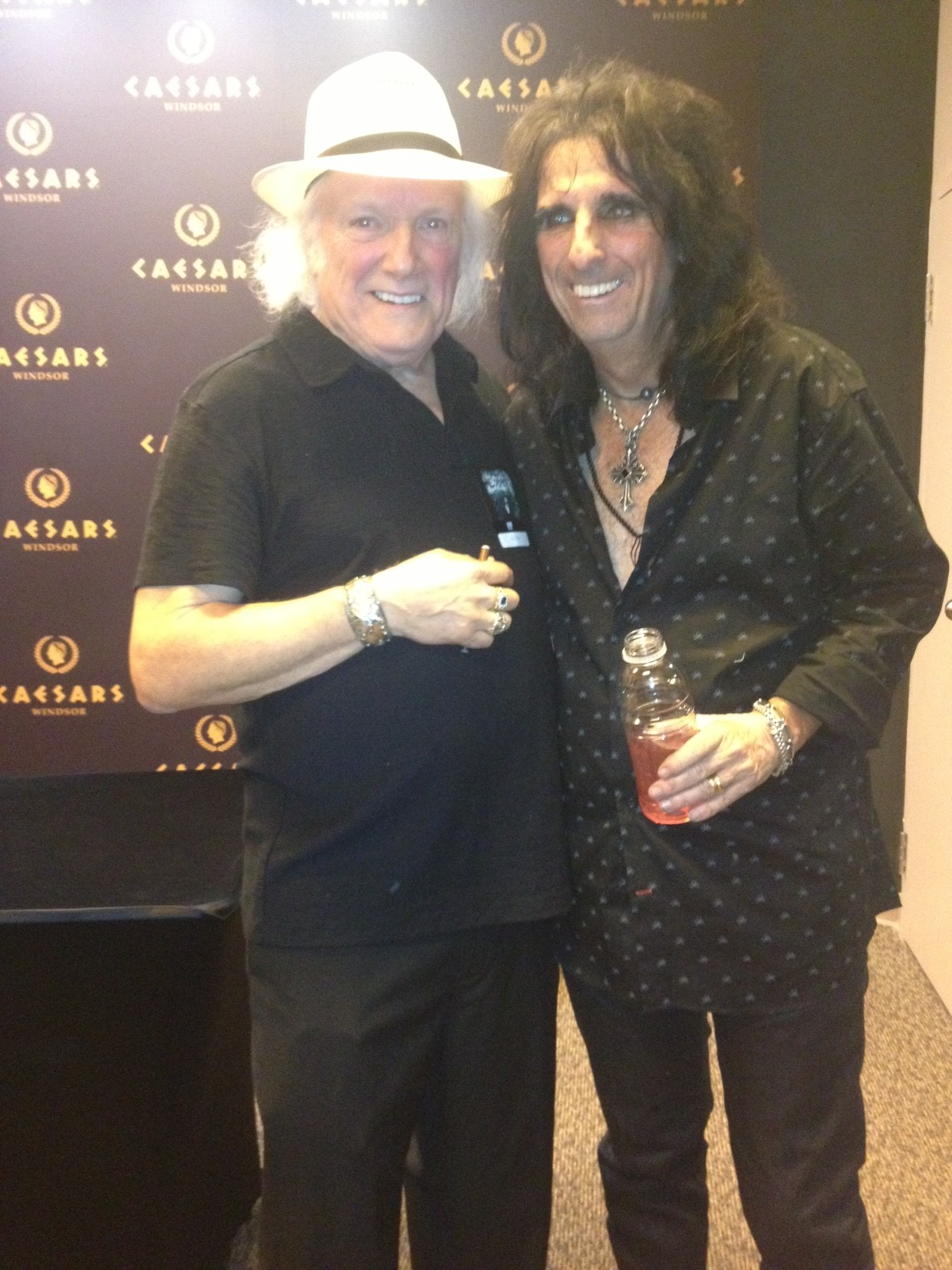 Legendary for his groundbreaking collaborations with Alice Cooper — for whom he was musical director, lead guitarist and co-writer of the icon’s biggest hits, including Only Women Bleed, You and Me, Welcome To My Nightmare and How You Gonna See Me Now, Wagner was Cooper’s right hand man on such groundbreaking albums as Welcome to My Nightmare, Alice Cooper Goes to Hell, Lace and Whiskey, From the Inside, The Alice Cooper Show and Da Da. Together, Cooper and Wagner co-wrote the majority of Alice Cooper’s top selling singles and albums, including more than 50 songs that are featured on more than 50 Alice Cooper albums worldwide.

Below is Alice Copper talking about hiring Dick Wagner for his band:

In September 2010, GIBSON.COM selected the guitar duo of Dick Wagner and Steve Hunter as #25 out of 50 in Gibson’s “Top 50 Guitar Solos of All Time” for their sizzling and legendary guitar work on Lou Reed’s live album, Rock ‘N’ Roll Animal.

The youth of Michigan and the Midwest first took notice of Wagner’s talent in 1964, when he formed his wildly popular band THE BOSSMEN, whose songs like Baby Boy were #1 radio favorites in the mid-west. In the late 1960s, as Wagner’s work became more complex and featured a harder edge, he formed the THE FROST, recording three Billboard charted albums and drawing enthusiastic crowds to hear songs like Mystery Man and Rock N’ Roll Music. 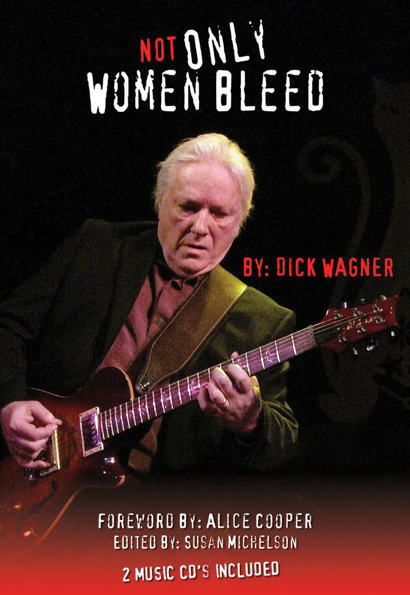 With his 2012 book release, NOT ONLY WOMEN BLEED, Vignettes from the Heart of a Rock Musician, Wagner recounts his memoirs of a life in rock and roll at the highest levels. He delivers tales of reckless behavior and intimate debauchery with an emotional reverberation that will resonate with a wide reading audience.

The clip below has Dick being interviewed on a radio program about the release of his book, “Not Only Women Bleed” (see the website for the book here). This clip has it all. In addition to hearing Dick’s actual voice, there are numerous pictures of the various stages of his life and career.

Excerpt from Wikipedia on Dick Wagner:

Wagner was born in Oelwein, IA.   At about the age of 12, his family moved to the Saginaw, Michigan, area. His first band, called the Bossmen, was a favorite in the Detroit area and scored radio play with the Wagner-penned composition “Baby Boy”. His next band, the Frost, with Donny Hartman, Bobby Rigg, and Gordy Garris, was formed in the late 1960s and built up a substantial following in the Michigan area. The band released three albums during their tenure together on Vanguard Records: 1969’s Frost Music and Rock and Roll Music, plus 1970’s Through the Eyes of Love.

Wagner then formed the short-lived group “Ursa Major” with former Amboy Dukes bassist Greg Arama and released one self-titled album. Wagner was soon recruited for Lou Reed‘s band along with Steve Hunter. They played on the Rock ‘n’ Roll Animal live album. Soon after, producer Bob Ezrin brought both Wagner and Steve Hunter into sessions with Alice Cooper, Wagner having already featured on the School’s Out album playing the memorable guitar solo on the track ‘My Stars’.

The result was that after the breakup of the Alice Cooper group Wagner became Alice Cooper’s right-hand man on the next four studio albums that followed, the 1975 ground breaking Welcome to My Nightmare the revolutionary live show also featuring Wagner and Hunter in a guitar battle captured on the film of the same name released on home 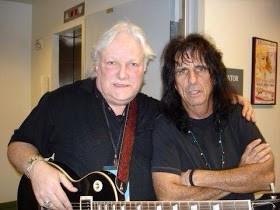 video in 1976. Follow up albums Goes To Hell, Lace and Whiskey, From the Inside and DaDa, also saw Wagner helping in songwriting, composing, production and playing lead guitar. Wagner was assisted in most of these endeavors by Steve Hunter. The two have been best friends since their work with Lou Reed and a film about their work together with Reed, Cooper and others entitled ‘Rock and Roll Animals’ featuring interviews with Wagner, Hunter and Alice Cooper is currently in production.

Below is Dick Wagner and Steve Hunter performing together while a member of The Alice Cooper Band:

Here is a somewhat recent clip of Dick Wagner singing a song that he wrote with Alice Cooper, “Only Women Bleed”.  In the introduction, he describes how he wrote the song before he met Alice and it never went anywhere because he hated the lyrics. He then got together with Alice and the rest is history.

Some of the other highlighted albums during the 1970s include: Lou Reed’s Rock ‘n’ Roll Animal and Berlin albums, KISS‘ Destroyer, Aerosmith‘s Get Your Wings, Peter Gabriel‘s self-titled solo debut, Hall & Oates‘ Along the Red Ledge, Burton Cummings‘ Dream of a Child, Mark Farner‘s solo debut and a pair of albums for the star of The Rocky Horror Picture Show, Tim Curry.

Trivia Question: Who played the guitar solo in the Aerosmith song “Train Kept a Rollin'”? Click here for the answer.

The Mystery of Aerosmith’s “Train Kept a Rollin'” solos.

Below is a live recording of the Lou Reed song, Sweet Jane. Check out the “extended” intro featuring Dick Wagner and Steve Hunter. No video, just audio. But a classic in Rock and Roll history:

Here are two interviews Dick gave regarding his book “Not Only Women Bleed:

One is Dick’s most recent efforts (2011) was a tribute song he wrote for the men and women in uniform who have served our country. Dick on lead vocals and lead guitar:

Alice Cooper’s comments on the death of Dick Wagner:  “Even though we know it’s inevitable, we never expect to suddenly lose close friends and collaborators. Dick Wagner and I shared as many laughs as we did hit records. He was one of a kind. He is irreplaceable. His brand of playing and writing is not seen anymore, and there are very few people that I enjoyed working with as much as I enjoyed working with Dick Wagner. A lot of my radio success in my solo career had to do with my relationship with Dick Wagner. Not just on stage, but in the studio and writing. Some of my biggest singles were ballads what I wrote with Dick Wagner. Most of “Welcome To My Nightmare” was written with Dick. There was just a magic in the way we wrote together. He was always able to find exactly the right chord to match perfectly with what I was doing. I think that we always think our friends will be around as long as we are, so to hear of Dick’s passing comes as a sudden shock and an enormous loss for me, Rock N Roll and to his family.””

Internet clippings of the passing of Dick Wagner:

Click here to see Facebook page dedicated to the induction of Dick into the Rock and Roll Hall of Fame.