Excerpt below from the February 25, 2016 edition of the Oelwein Daily Register.

Read more of this story in the Oelwein Daily Register :

OELWEIN — The Oelwein Area Historical Society is hoping to make the dreams of many area people a reality with Wednesday’s announcement that the OAHS has purchased the former Coliseum ballroom. OAHS President Dave Moore told the Daily Register that he and a few historical society members have been working in the building the past two weeks. 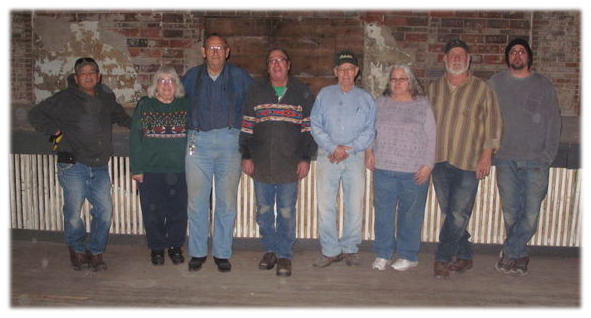 “Right now we are creating piles and piles of garbage to be hauled out. It needs a lot of work, but we are getting there,” Moore said.

Even though the 88-year-old structure is in disrepair, Moore said there are some positive aspects. He said some of the base work such as new heating and air-conditioning, wiring and plumbing has already been done, and the building has a new roof. Unfortunately, it leaked badly for a number of years before a new roof was put in.

“It will be a beautiful dance floor when I get it done,” Moore said.

Contact the Oelwein Area Historical Society to ask what you can do to help bring back the Coliseum to Oelwein.

The Coliseum Ballroom in Oelwein, Iowa opened its doors for the first time in 1928 with Paul Tremaine of New York providing the music for a capacity crowd.

Poster from the Coliseum Ballroom

Vern Sissel purchased the business in the mid 30’s and brought in big name bands.

Ray Stoddard, retired Oelwein police chief, recalled the admission to Lawrence Welk on a Saturday night was 50 cents per couple. He also remembered Sammy Kaye’s appearance in 1945 or 1946. Kaye drew 4,100 paid admissions at $2.50 per person. When Orrin Tucker appeared there with Wee Bonnie Baker, those who could not squeeze into the ballroom danced on the street to music from speakers set up outside.

Over many decades countless thousands of people passed through the main entrance double doors, past the ticket booth and coat check rooms to the main bar. A double line of wooden booths lined the walls from the entry to the stage. A balcony sat atop the entrance to the dance floor area; filled with booths for sitting and watching. The balcony also had a bar with food offered such as hamburgers and pizza.

Heavy curtains blocked the tall windows so the only light in the ballroom came from globe type lights suspended from the picturesque dull red metal ceiling. After the big band era waned, the newest owner Andy Doll gave teen dances a try. Rock and roll music filled the air in the ballroom. By that time other parts of the Coliseum building had closed. The second story apartment was unoccupied and the six-lane bowling alley in the basement shut down permanently in the 60s. 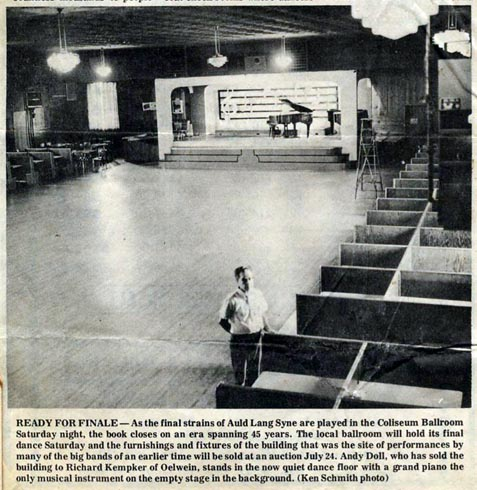 The Oelwein Register (July 12, 1973) announcing the final dance at the Coliseum. Pictured is Andy Doll, owner/operator at that time.

Doll purchased the ballroom in December of 1962. Doll was a musician and in that same year had the hit record “Wild Desire” on the national charts. He won the second best country western dance band award in the from the National Ballroom Operators Association, behind the legendary Hank Thompson.

The era of the Coliseum ended on July 14, 1973 when the ballroom held its final dance with music by Dave Dighton, one of the top bands in the area. Doll played the Coliseum’s famous grand piano for the final number at the final dance.

On Tuesday, July 24, 1973, the contents of the entire building, from the bowling balls to the drinking glasses were sold at a public auction billed as a “wall to wall” quitting business sale.

The Coliseum was one of Iowa’s Grand Old Ballrooms that is sadly now but a memory.

The Coliseum was once one of many ballrooms in Iowa. Today very few remain active.

The Coliseum Ballroom was inducted into the Iowa Rock and Roll Hall of Fame in 2011.